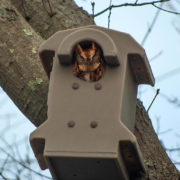 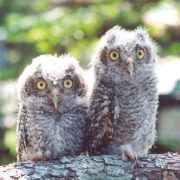 Our Screech Owl Nest Box is constructed of rugged, long-lasting, rotomolded plastic, yet is so lightweight at 5.5 pounds that it can be carried in one hand for easy mounting. The bark brown color allows it to blend into the trees where these nest boxes are best installed. Features include rainproof wing-vents, an access panel for viewing nest contents and cleaning the nest box, drain holes in the floor, a large rain guard over the entrance hole, an interior mesh ladder to the entrance hole, and a unique bracket system that allows easy mounting to a tree. Measures 16″ tall x 9″ wide x 9″ deep.

Screech Owls – The Owls of Backyards and Gardens

No sound of evening is as melodious as the soft, subdued song of the screech owl. Far from a screech, the sounds that emanate from the song box of this small owl are the gentlest, sweetest music of the owl world. It would seem that the misnomer must have originated when an observer heard the ungodly scream of a barn owl while looking at a “screech owl.” No matter how it occurred, no more inaccurate name of a bird exists in the literature.

The screech owl, represented by the eastern and western races, ranges throughout the United States, and is not only a common resident of woodlands, but also commonly makes its home in urban and suburban backyards and gardens. Here it is easily attracted to suitable nest boxes where it will raise as many as six young. The screech owl preys on mice, voles, and large insects such as moths and beetles. It has even been known to take crayfish.

Eastern screech owls come in two color phases; a gray phase and a red phase. Both color phases can occur in the same brood of chicks.

The first sign that you may have a screech owl living on your property may be the presence of white droppings on the ground and vegetation. These will be concentrated beneath the perch where the screech owl sits quietly during the day or hunts from at night. Normally there will be little sign of presence beneath the nest box. Instead, once screech owls occupy their owl house, they will tend to sit in the entrance hole for up to an hour before they leave to hunt, watching the world outside. This happens around sundown, while there is still plenty of light to observe them.

Another method of observing screech owls is to call them to a tape, or imitate their tremolo songs while holding a flashlight. Once you a screech owl call back, you want to wait and continue calling until the owl is quite close. Then you can turn on your flashlight. The screech owl will be on high alert, wanting to know if a rival screech owl has entered his territory. So, when calling these little owls from their owl houses and perches, be aware that you are possibly interrupting their seasonal activities. For this reason, do not call them to excess.

Where to Install Screech Owl Boxes

Screech owls actually have been shown to prefer the gardens and yards we create around our homes. Partly wooded areas with shrubs and open areas are their favorite habitat. Screech owl nest boxes should be erected approximately 10 feet off the ground on medium to large sized tree trunks, beneath the shade of foliage.