Mark Browning, the designer of our nest boxes, has been conducting barn owl research for the past ten years. He conducted the first satellite telemetry project that tracked the seasonal movements of young barn owls. The data revealed that young barn owls disperse dramatically in the fall. Several of the birds, released in Pennsylvania, flew as far as the deep south, one going as far as New Orleans for the winter.

In 2011, Browning began a new research project, the Barn Owl/Rodent Project, designed to measure the effect of a large, dense population of barn owls on a resident rodent population. On a 100-acre vineyard situated 30 miles south of Sacramento, California, Browning and a team of students from U.C. Davis, Sacramento State College, and Cosumnes River College erected 25 nest boxes in an effort to see just how dense of a population of barn owls could be attracted to a relatively small area. At the same time, the team began to measure rodent activity on the study area. (The vineyard was chosen because of its heavy pocket gopher and vole infestation.) This was the first study ever conducted designed to measure rodent numbers in relation to numbers of barn owls. (Studies in Malaysia had measured crop damage by rodents in the presence of high numbers of rodents.) Our pairs averaged over 5 chicks per box

In 2011, 20 nest boxes (five more added later) were erected on the perimeter of the vineyard in February; by late March, eleven pairs of barn owls occupied nest boxes and had laid eggs. These 11 pairs successfully fledge 44 young, creating a population of 66 owls feeding off the vineyard by early summer. 2012 showed a dramatic increase in owl occupation, with 18 breeding pairs that fledged 66 young for a total of 102 owls harvesting rodent pests in the area, a prodigious number of owls living off a scant 100 acres and the highest number of barn owls ever reported in a concentrated area. 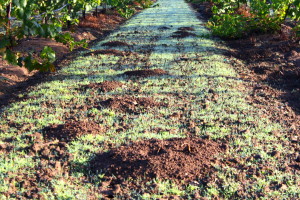 While increasing the barn owl population, the research team also surveyed activity of the most prevalent rodent, the pocket gopher. Their mounds were ubiquitous between the rows of vines. These surveys indicated a negative correlation between barn owl numbers and rodent numbers, with both populations experiencing seasonal curves. Importantly, the numbers of pocket gophers have declined steadily, never reaching the high densities that were present prior to establishing the owls.

Barn Owl Diet on the Vineyard

Pellet analysis during this period has shown that the barn owl diet on the study area is comprised mainly of pocket gophers (83%), with voles coming in at around 16%. We have also found deer mouse, and Norwegian and roof rat remains in the pellets. Voles are often cited as a regulatory factor in barn owl populations around the world. But this study and others point to the fact that barn owls are truly adaptable and when a certain prey species is prevalent, barn owls will adjust to hunting that species. This is often the case in agricultural settings where rodents that would otherwise be scarcer now dominate the environment. Such is the case in sugar cane where cotton rats are the most harvested rodent, and in rice farms where the rice rat is the favorite prey. The interesting thing is that the vole truly is a perfect size for the barn owl (averaging two ounces in weight)–easily captured and, most importantly, easily swallowed whole. But the barn owls adapt, pulling apart adult pocket gophers (that may weigh greater than eight ounces–four times the size of a vole) if they cannot swallow them.

Analysis of nest box direction in relation to occupation has shown a preference for selecting nest boxes facing easterly directions and a relatively low selection of southwest facing directions. This preference of easterly facing entrance holes has been demonstrated in other bird research to be a thermoregulatory choice–in the cool mornings, the rising sun warms the nest box; in the hot afternoons, the entrance hole is shaded. This was true in our study. However, keep in mind that barn owls do not operate by hardfast rules and they will indeed choose all of the other directions if that is what is available. Adults, eggs, and chicks were monitored on a monthly basis.

In 2013, the Lodi Winegrape Commission awarded a grant to the Barn Owl/Rodent Project to fund the purchase of two solar-powered, motion-sensor, infra-red cameras for the purpose of recording the numbers of prey being brought in through the eight-week fledging period of the fledgling owls in two active nests. It was theorized that using pellet analysis in order to determine actual numbers of prey being harvested may lead to inaccuracies. Video was considered to be highly accurate and capable of providing a much-desired figure: how many rodents are harvested, on average, for each chick through the nesting period up to fledging. This figure can be very useful to farmers in determining how many nest boxes to install on a given amount of acreage, particularly if coupled with a general idea of the degree of rodent infestation.

Barn owls take approximately eight to nine weeks to fledge. These chicks are about 3 weeks away.

Practical Application of the Study

The purpose of the study was to provide practical information to farmers on utilizing barn owls in integrated pest management programs. Goals of the project included determination of optimum numbers of nest boxes required for significant rodent control, optimum number of nest boxes in relation to acreage, preferred nest box orientation preferred by the barn owl, expectation of seasonal fluctuations in rodent populations while using barn owls, and possible integration of other pest control methods for optimum results.

Results of the Barn Owl/Rodent Project

The data gleaned from this three year study has yielded a great deal of information of practical use to vintners and farmers.

This page will continue to be updated as we are able to incorporate more of our findings.