Save $40 off of our regular price. No limits on purchases.

Take advantage of our deep Xmas discounts for our premier product, the Barn Owl Nest Box Pole Model. This plastic molded nest box is lightweight, long lasting, heat resistant and is by the far the best barn owl box on the market. It is now in use by thousands of vineyards, orchards, state wildlife agencies, and private property owners. Normally $259, it is now deeply discounted for Christmas at $219. Good till December 18th! Go to https://www.barnowlbox.com/shop/boxes/the-pole-model/ to order.

Barn owls consume extraordinary numbers of harmful rodent pests including pocket gophers, voles, mice, and rats and have been shown to significantly reduce pest numbers and damage to crops from pests. See the PBS segment on our research in California here: http://www.americasheartland.org/episodes/episode_714/owls_save_crops.htm 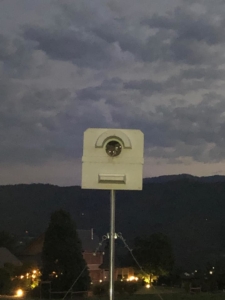 Note the baby barn owls peering out from the entrance.

The Barn Owl Nest Box Pole Model, constructed of rugged molded plastic, features a landing ledge, exterior perch, rain guard, and viewing window in the rear. It incorporates heat reflective pigments in the outer box, combined with highly efficient venting that keeps the nest box near ambient temperature in full sun. The nest box has been used in various research projects around the country and achieves 80 to 100% occupancy in many regions. State biologists in California, Illinois, Indiana, Missouri, South Carolina, Wisconsin, and Pennsylvania have been installing them in conservation programs. Vineyards, orchards, row crops, sugar cane and other agriculture use them in sophisticated nest box programs to create dense populations of owls that                        reduce rodent numbers and rodent control costs.

Barn owls begin breeding activity as early as January in warmer areas, and as late as early March in others. They are highly skilled at locating cavities suitable for nesting and constantly search for entrances that will accomodate them and their young. The best time to install is anywhere from November to mid-March. We also offer the Barn Owl Box Pole Kit, visible in the photo on the right that allows for easy installation. You can see this product here: https://www.barnowlbox.com/shop/installation/339/

Chronic use of cocaine is associated with relative dopaminergic hypofunctioning and may underlie the withdrawal symptoms and craving observed in cocaine-dependent persons who have recently established abstinence [ 9]. Do not receive a “live” vaccine while using Dupixent. Use: Prevention of exercise-induced bronchoconstriction (EIB) in patients 6 years of age and older Detailed Singulair dosage information What happens if I miss a dose apotek24.org. Treatment for other illnesses Always tell other doctors, nurses, pharmacists or dentists that you’re having this treatment if you need treatment for anything else, including teeth problems. South Carolina is an important state for barn owls. Satellite tracking studies of barn owls have shown that a high percentage of young barn owls in the northern states migrate in the fall down over the eastern mountains and onto the coastal plains. Many of them winter in good habitat from the Carolinas all the way along the Gulf states to as far as Louisiana. One such bird flew 450 miles from western Pennsylvania to St. Stephens, South Carolina and hunted along a canal there through the winter, then in spring flew back to a barn in Ohio, sixty miles from its original release point. Besides being an important migration route as well as wintering ground for northern birds, South Carolina has always harbored good resident populations of this big white owl. However, in recent years, with changing agricultural practices, spreading suburbs, and a decline in the numbers of barns, barn owl populations in the state may be declining in some areas. One of our nest boxes installed by S.C. DNR

In an effort to strengthen state barn owl populations, the South Carolina DNR has been erecting barn owl nest boxes since the mid 1990’s. Their focus has been mainly in coastal areas, particularly areas of salt water marsh and old rice fields, both excellent habitat. They have also begun erecting boxes in areas with grasslands and ponds. Out of 44 nest boxes monitored in 2014, 35 of these were of our plastic design from the Barn Owl Box Company. Overall, the DNR reported that 86.6 % of the nest boxes were either used for nesting (50%) or roosting (36.6%), leading to the conclusion that their nest box program is a very effective management tool for barn owls. This is particularly true because barn owls are cavity nesters, and when barns and large hollow trees are unavailable, nest boxes are an excellent enhancement of good habitat.

The Cape Romain Bird Observatory Barn Owl Nest Box Project encourages farmers and property owners along the southeastern part of the state to install barn owl nest boxes. The organization provides nest box plans, and occasionally helps fund materials. Interested individuals can contact them by clicking on the link above.

One study of 91 pellets taken from eight nest boxes in salt water marsh habitat revealed voles comprised 63% of prey taken. Another 19% was comprised of rice rats, with black and cotton rats making up another 3%. Rice rats are a major pest in grain fields, and barn owls have excellent potential to help lower their numbers and lower crop damage in fields where rice is grown. Barn owls likely occur throughout the state, however the heaviest populations occur in the counties along the coast, with barn owls mostly scarce in the Piedmont. Other robust populations appear to be in the central part of the state particularly in Calhoun, Clarendon, Sumter, and Lee Counties. These areas are largely rural and agricultural. Another area with reliable reports is from Anderson County – these sightings have been on farms with hay and pastureland. Regions of pine plantations, heavy forest, and fields of cotton, soy, and corn provide poor habitat for the barn owl.

Barn owls keep a keen eye out for potential new nesting sites, and as long as you live in an area with hay, pastureland, grasslands, or wetlands, you stand a good chance of attracting a pair of these beautiful birds. Biologists throughout the barn owl’s range encourage residents to install nest boxes in good habitat. If indeed you do succeed in attracting barn owls, contact the South Carolina DNR which monitors state populations.

A special thanks to wildlife biologist Mary-Catherine Martin of the South Carolina DNR for providing valuable information for this article and both photographs.