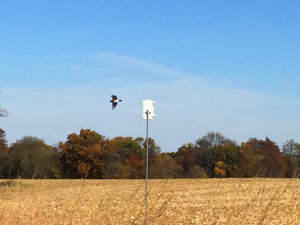 “I purchased four bluebird houses from you in early spring. After an easy setup on my property, I had renters within two weeks–three out of four nest boxes were occupied with bluebirds throughout the summer, producing multiple clutches. I highly recommend this bluebird house!”  — Tom Sedenka, Lisbon, Iowa

The bright interior is great for Bluebirds and repels House Sparrows

Bluebird enthusiasts are extremely loyal to their favorite bird and are also very discerning about the kind of nest box that they use for attracting these beautiful songbirds. So when we launched our new product line, featuring a heat-resistant, white plastic nest box for bluebirds, many an eyebrow was raised in terms of the white color and the plastic material. As it turns out, the nest box has proven to be a superior home for bluebirds to raise their young. The result is a nest box that will far outlast wooden ones, is extremely lightweight, and features a number of useful innovations.

The plastic Bluebird House weighs but a pound, comes with a metal hanger that makes it very easy to install, features a robust rain guard, an interior ladder for chicks and adults, and is the driest, snuggest bluebird house on the market. It is the only bluebird house that comes with vent plugs to block out blackflies when they become a problem. The rear of the house has a molded-in pole channel to allow a half-inch diameter pipe to slide in. All that is left for installation is to tighten the provided tube strap around the pipe.

Best of all, The Bluebird House has achieved a 75% occupancy rate in field tests. Not only have our customers reported similar results, they have had their bluebirds raise double and even triple clutches successfully.

One of the most innovative features of the nest box is its white translucence– the bright interior attracts bluebirds but repels sparrows, which have been proven to shun light. This has been achieved by bluebird house enthusiasts in the past through adding skylights to wooden boxes. One plan even called for a roofless, open house. The problem with both solutions is rainwater that wets the inside of the nest and ruins nesting attempts. Our design allows ample lighting of the interior while providing a moisture proof environment.